Scotfest A-Class is one who, in the past two (2) years, has personal records exceeding four (4) or more of the following marks:

Scotfest B-Class is one who, in the past two (2) years, has personal records exceeding four (4) or more of the following marks:

Scotfest C-Class is one who, in the past two (2) years, has personal records exceeding four (4) or more of the following marks:

Scotfest Novice-Class is an amateur whose personal records do not exceed at least four (4) of the above marks.

Scotfest Lightweight-Class is an amateur class in which all throwers’ weight is 200 lb. or less.

Scotfest Masters-Class is an amateur who is over forty (40) years old by the date of Scotfest.

Scotfest Masters-Class 2 is an amateur who is over fifty (50) years old by the date of Scotfest.

Scotfest Masters-Class 3 is an amateur who is over sixty (60) years old by the date of Scotfest. 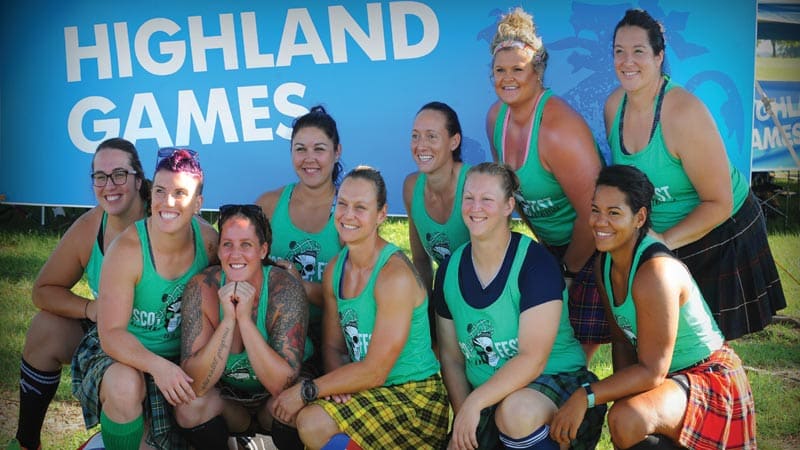 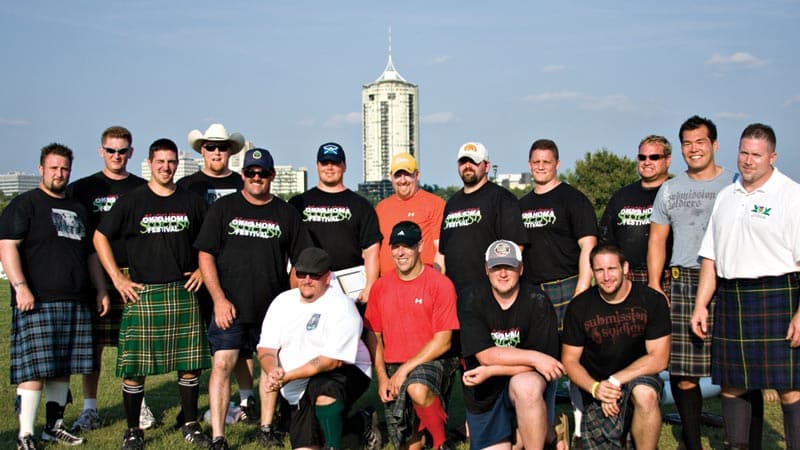 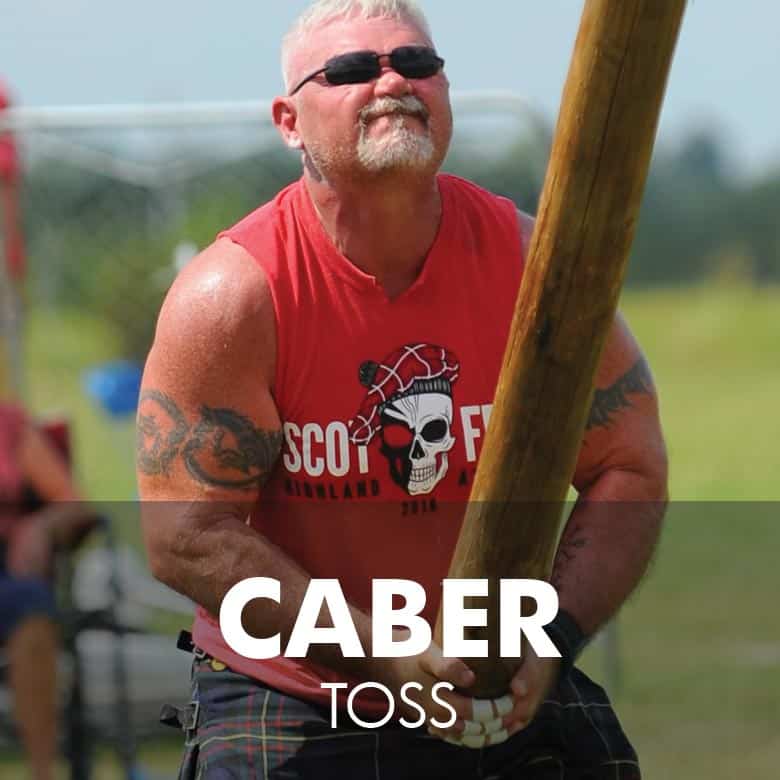 The Caber is a tree that has been cut and trimmed down so one end is slightly wider than the other. It can vary length from 16 to 22 feet and between 100 and 180 pounds. The smaller end is rounded off so it will be easy to cup in the thrower’s hands. The caber is stood up for the thrower with the large end up. The thrower hoists the caber up and cups the small end in his hands. He then takes a short run with the caber and then stops and pulls the caber so that the large end hits the ground and the small end flips over and faces away from the thrower. The caber is scored for accuracy as though the thrower is facing the 12:00 position on a clock face. A judge behind the thrower calls how close to the 12:00 position the small end of the caber lands, 12:00 being a perfect toss. If the caber is not turned, a side judge calls the degrees of the angle the caber makes with the ground.
This event is similar to the hammer throw as seen in modern-day track and field competitions, though with some differences. In the Scottish event, a round metal ball (weighing 16 or 22 lb. for men or 12 or 16 lb. for women) is attached to the end of a shaft about 4 feet in length and made out of wood, bamboo, rattan, or plastic. With the feet in a fixed position, the hammer is whirled about one’s head and thrown for distance over the shoulder. Hammer throwers sometimes employ specially designed footwear with flat blades to dig into the turf to maintain their balance and resist the centrifugal forces of the implement as it is whirled about the head. This substantially increases the distance attainable in the throw. 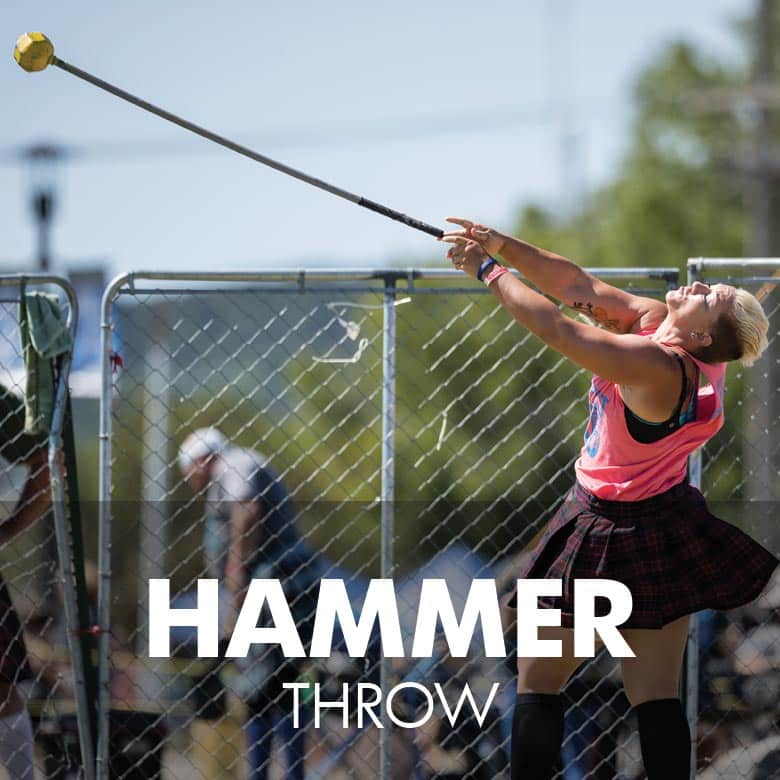 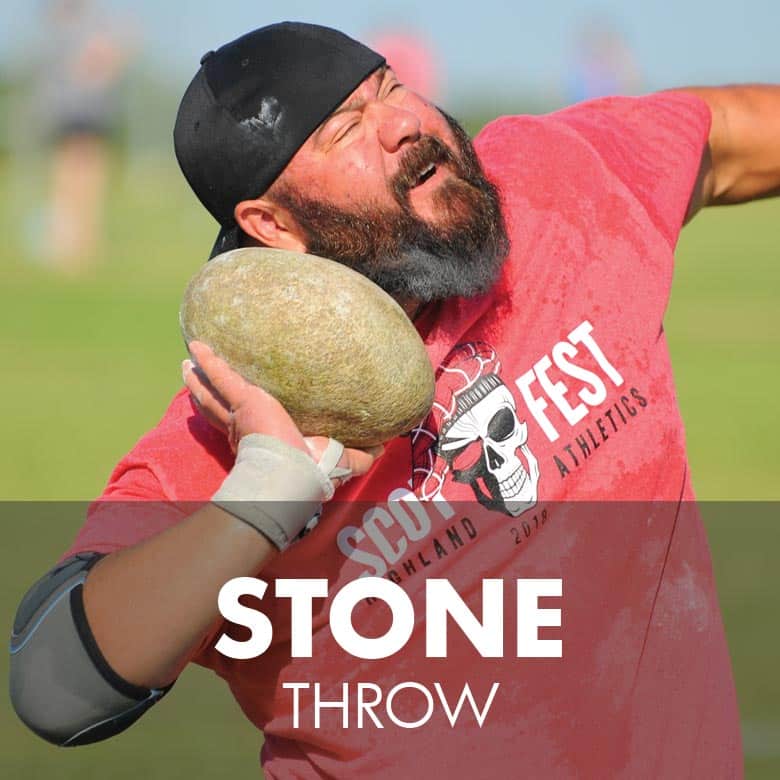 This event is similar to the modern-day shot put as seen in the Olympic games. Instead of a steel shot, a large stone of variable weight is often used. There are also some differences from the Olympic shot put in allowable techniques. There are two versions of the stone toss events, differing in allowable technique. The “Braemar Stone” uses a 20–26 lb stone for men (13–18 lb. for women) and does not allow any run up to the toeboard or “trig” to deliver the stone, i.e., it is a standing put. In the “Open Stone” using a 16–22 lb. stone for men (or 8–12 lb. for women), the thrower is allowed to use any throwing style so long as the stone is put with one hand with the stone resting cradled in the neck until the moment of release. Most athletes in the open stone event use either the “glide” or the “spin” techniques.
Weight for distance, also known as the weight throw event. There are actually two separate events, one using a light (28 lb. for men and 14 lb. for women) and the other a heavy (56 lb for men, 42 lb. for masters men, and 28 lb for women) weight. The weights are made of metal and have a handle attached by means of a chain. The implement is thrown with one hand using any technique. Usually a spinning technique is employed. The longest throw wins. 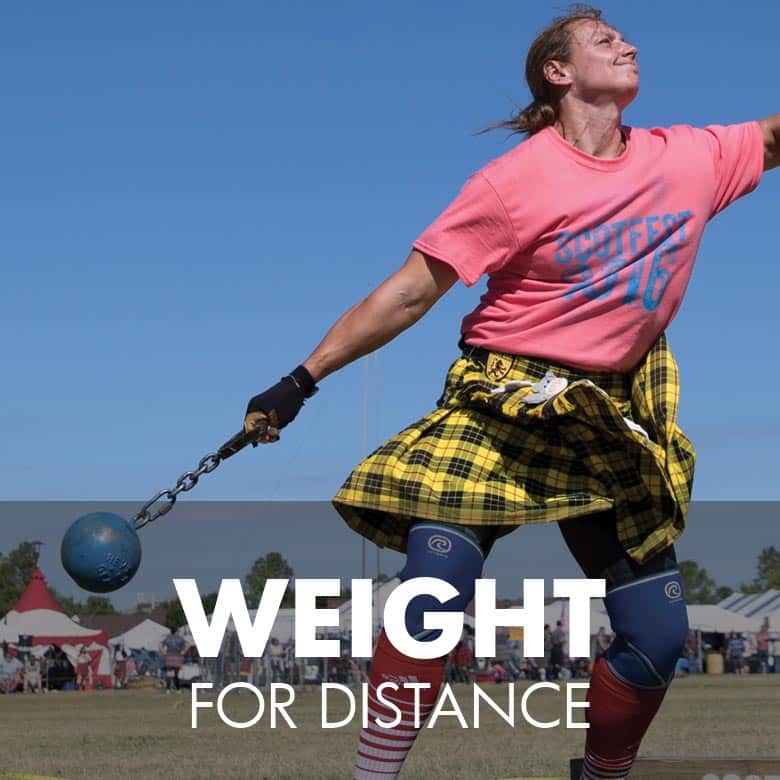 The athletes attempt to toss a 56 pound (4 stone) weight with an attached handle over a horizontal bar using only one hand. Each athlete is allowed three attempts at each height. Successful clearance of the height allows the athlete to advance into the next round at a greater height. The competition is determined by the highest successful toss with fewest misses being used to break tie scores.